Vocal registers are one of the most talked about - and yet still misunderstood - concepts in voice training. As far back as the 1970s, the Collegium Medicorum Theatri (CoMeT) - an international organization of voice specialists - formed a committee to attempt to clarify the concept of vocal registers. The fact that the debate still rages nearly fifty years later is an indication of how confusing this concept can be.

The confusion comes from the fact that the term 'register' means different things to different people. An accepted definition is that a register is 'a series of consecutive tones with similar properties'. But what those properties are depends on your point of view.

Although there is some correlation between the terminology of registers and the mechanisms involved in their production, it is important to differentiate between the terms 'mechanism' and 'register'. 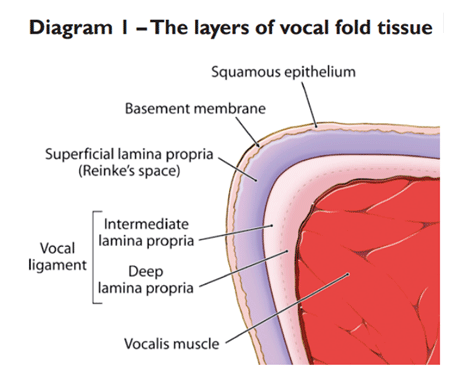 Voice scientist and researcher Minoru Hirano (1974) introduced the Body-cover model of vocal fold anatomy, in which the five layers of vocal fold tissue can be categorised into two components - the Body and the Cover.

Using the Body-Cover model explained above, we can define 'registers' in terms of which parts of the vocal fold are vibrating - the Laryngeal Mechanism.

Research in recent years (by Natalie Henrich and others) has identified four different Laryngeal Mechanisms, numbered from 0 to 3:

The decision to number the Laryngeal Mechanisms rather than name them was made to move away from the confusing and inexact concepts of 'Head' and 'Chest' registers / voices.

But if you want to understand Laryngeal Mechanisms in other, more familiar terms:

You'll notice that 'Mix' and 'Middle' are listed as both M1 and M2. This is because singers access their 'Mix' in different ways, as explained in this article: What is the 'Mixed' voice?

Although the vocal fold vibration can be determined precisely in terms of the laryngeal mechanism used, the sounds produced by an individual mechanism can have great variations in timbre and intensity, due to the shaping of the vocal tract.

The vocal tract is where singers determine the acoustic properties of the sound such as timbre, resonance and language (vowels and consonants). For this reason, when discussing Singing register, we have to take into account the effects of what we can describe as acoustic registration events - for example, the fact that certain vowel sounds favour certain pitches or timbres. In the article Belting explained, I discuss two basic interactions of the vocal tract with the vocal fold vibration - Yell timbre and Whoop timbre, two distinct sounds that any singer or listener can differentiate without any particular need to understand what's happening.

For a complete understanding of Singing registers, we would need to look in more detail at acoustic registration events such as passive or active vowel modifications, but this is beyond the scope of this article. Suffice to say here that singers rely heavily on acoustic and perceptual feedback. Although this feedback is personal, it's vital to be able to discuss the voice with singers in these terms, as the sound and associated sensations are often all they have to go on.

In my article 'Head' and 'Chest' voice explained I try to separate the concepts of 'Voice' and 'Register' by explaining them from the perspective of the vocal folds and the vocal tract. In a similar way, we can try to understand Scientific and Singing registers as follows:

Unfortunately, any discussion that relies on singers' perception of sound and feeling necessarily starts to get vague and subjective, hence why we see so many debates about 'head and chest' versus 'Belt' and 'falsetto' etc.

But whatever you call the Voice Quality, the voice is still subject to the same natural laws and produced by physical structures. My personal approach is that it's fine to describe your voice in terms of how it feels and sounds to you - and to 'name' it accordingly as a Singing register- but an understanding of the mechanism producing that sound (the Scientific register) is very helpful, and can eliminate a lot of doubt and confusion.

The problem with Pitch

Although flexible, the vocal folds still have physical limitations. As you sing higher in an M1 (Body and Cover, Thick, 'Chest') vibration, the vocal fold tissues stretch. Up to a certain higher pitch (different in every individual, but around B3 to F4) the Body is still involved in the vibration. Beyond that point, the Body can't stretch and it decouples itself, leaving the Cover to vibrate alone (M2, Thin, 'Head')

Similarly, when singing from high to low in an M2 vibration, the Cover will vibrate alone until you reach a certain lower pitch, at which point the Body will abruptly resume its vibration.

Register transitions happen to all singers - the good ones just learn to disguise them!

The frequency ranges produced by two consecutive mechanisms partially overlap each other, sometimes by as much as an octave. Blending or 'mixing' (aka 'singing in the mix') is a vocal technique utilised in this overlap region, with the aim of disguising the transition from one mechanism to the other.

It can be a confusing concept for singers who rely heavily on perception as it doesn't feel like either a pure M1 or a pure M2. But it isn't a separate Scientific register.

I explain this fully in this article: What is the 'Mixed' voice?

The challenge for a professional singer is to learn how to maintain a certain mechanism beyond the limits of its natural attractor state, OR to allow the mechanism to change and manipulate other structures to keep the sound consistent.

A great technique comes from a solid understanding of the laryngeal mechanisms, and how they can be utilised. Vocal fold mass, medial compression, resonance effects etc all contribute to the overall voice quality. Having independent, isolated control over each of these components gives the singer the ability to blend and adapt the sound in very subtle ways.

Every singer’s voice has to change mechanisms at various points in the range. The skilled singer learns to disguise those changes - hence why, to a listener, it can sound as though the singer is in the same mechanism. For example when you hear a female singer with a strong high note, you may well believe that she's singing in M1. But if that note is beyond the natural boundary of her M1, she's actually singing in M2 and making it sound like M1 - the definition of 'Mix'.

It's this misconception that often leads untrained or inexperienced singers to push and force the voice, mistakenly thinking that they can take M1 up to those higher pitches.

Think about it - the whole point of this technique is to disguise the natural physical changes that happen when you sing through your entire vocal range. If you can hear those changes, your technique is faulty!

The ideal technique in a nutshell: making different things sound the same.

Become the singer you've always wanted to be

Discover your true potential and take control of your future